One by one, the passengers pulled down their masks and rejoiced as they cleared security and health screening to board the first cruise ship sailing out of North America since the pandemic was declared in March of last year.One woman threw her bag on the floor and started shimmying to the Caribbean calypso beat playing in the welcome hall. Another triumphantly bumped fists with a crew member before giving him a hug, while an older man stood still and gazed at the elated guests, his eyes welling up as he processed the reality of being back on a cruise, one of over 400 he has taken in his lifetime.“We’re back, we’re home,” one passenger yelled as she entered the vessel. “Welcome back ma’am,” a crew member responded with a gleaming smile. “We’ve missed you.”
Image 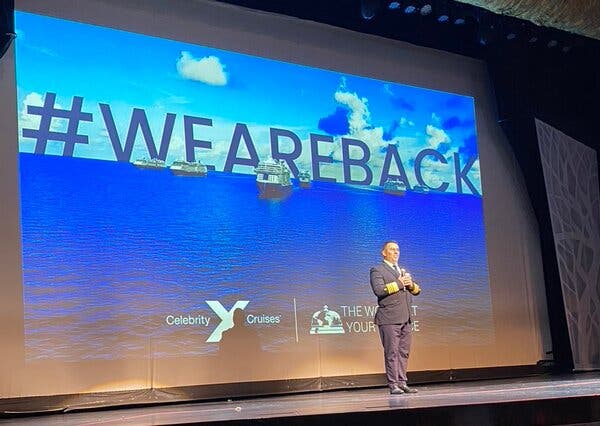 The Celebrity Millennium’s captain, Theodoros Zakkas, addressed passengers after the ship left port. Credit…Ceylan Yeginsu/The New York Times
For many of the 600 or so passengers embarking on the Celebrity Millennium, operated by Royal Caribbean’s Celebrity Cruises, from the Caribbean island of St. Maarten on Saturday, this was the moment they had dreamed of over the last 15 months, as cruise ships remained docked in ports, even after vaccinations rolled out in the United States and people started to travel again.