Living Not Just by the Water, but Over and Even Below It

It was an idea born from the tropical desperation of three American friends who had moved to French Polynesia on a whim in 1959.Their first plan there — to run a vanilla farm — had fallen through, so they resolved to try the hotel business. Tourism was nascent, and international visitor numbers had begun to grow after a new airport opened on the main island, Tahiti. The three men — Jay Carlisle, a stockbroker; Hugh Kelley, a lawyer; and Donald McCallum, a salesman — bought a couple of properties to turn into funky hotels they called the Bali Hai. One was on the island of Ra’iatea.“It was a little five-room property, on the lagoon, with the reef right in front of it,” Mr. Carlisle, who is 86 and the group’s last surviving member, recalled in a recent telephone interview. But there was a downside. “There was no beach.”
Image 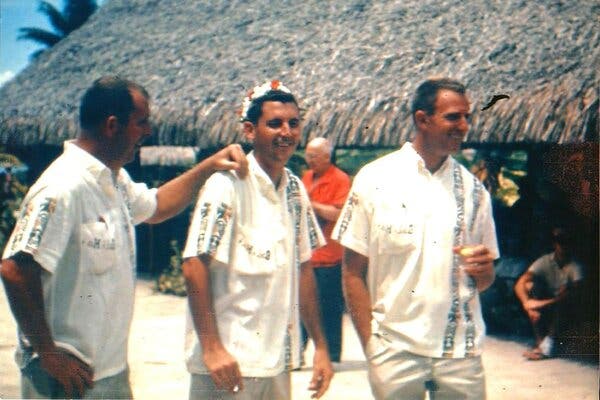 From left, Hugh Kelley, Jay Carlisle and Donald McCallum, the Americans who developed the overwater concept, in an undated photograph.Credit…Jay Carlisle
His friend Mr. Kelley had an idea: Why not build a few rooms that sat directly above the lagoon, on piles, joined to the land by a walkway that was set a few feet above the water, too? They built three to start, charging $30 per night per couple. The oddball idea became an instant phenomenon: Now known as an overwater bungalow, the design became the hotel’s signature detail and helped establish French Polynesia as a tropical getaway.