Traveling to Greece? What to Know About the Reopening

Greece has reopened to many overseas visitors, including from the United States, jumping ahead of most of its European neighbors in restarting tourism, even as the country’s hospitals remain full and more than three-quarters of Greeks are still unvaccinated.It’s a big bet, but given the importance of tourism to the Greek economy — the sector accounts for one quarter of the country’s work force and more than 20 percent of gross domestic product — the country’s leaders are eager to roll out the welcome mat.And although the U.S. State Department recently added Greece to its long list of countries with the designation “Level 4: Do Not Travel,” Greek officials maintain that — with social distancing measures and testing protocols, alongside the warming weather — tourism in the country will be safe, for visitors and residents alike.

In easing its border restrictions, Greece has jumped ahead of a broader European Union reopening to tourists from outside the bloc, but the country is not alone in pushing the timeline. Among European Union members, Croatia and Cyprus have also already opened to vaccinated and Covid-negative tourists, including from the United States. And President Emmanuel Macron of France announced last week that, if the country’s epidemiological situation allows, the country will open on June 9 to all non-European Union visitors, provided that they carry a “health passport,” details of which have yet to be announced. Outside the European Union, but still within Europe, Iceland, Montenegro and Serbia have already taken steps to ease their border restrictions, including for American visitors.
“We welcome a common position” on restarting tourism in the European Union, Greece’s tourism minister, Harry Theoharis, said in an interview. “All we’re saying is that this has to be forthcoming now. We cannot wait until June.”According to the current rules, visitors arriving from the United States, the European Union, Britain, South Korea, Australia and a handful of other countries are now allowed quarantine-free entry into Greece, on the condition that travelers provide proof of Covid vaccination or a negative PCR test taken up to 72 hours before their arrival. Arriving visitors may also be subject to random, obligatory rapid tests at the airport; anyone with a positive result will be required to quarantine at a Greek hotel along with their traveling companions for at least 10 days, at the expense of the Greek government.The new terms of entry were applied to tourists from the United States and several other countries as of April 19; they are expected to be extended to all visitors on May 14.
Image 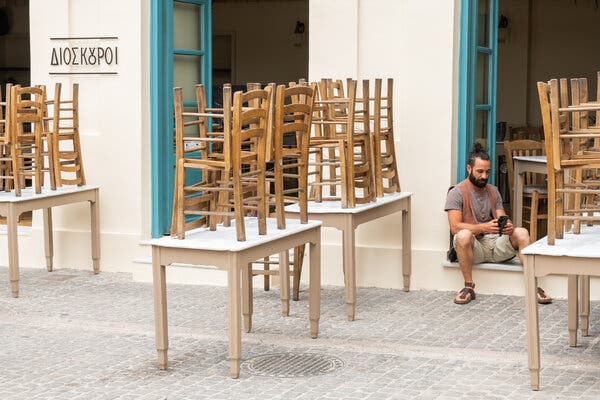 Protecting Greek citizens from the coronavirus is a priority, said one government minister, but so is shielding them from the devastating effects of a prolonged economic decline. Tourism and food are a huge part of the country’s economy.Credit…Maria Mavropoulou for The New York Times