Life and Death on Stromboli Volcano, Lighthouse of the Mediterranean

If you stand at the summit at night, and you turn your flashlight off, all you can see are diamantine flecks shimmering in the dark. In that moment, you are floating, untethered, in an endless inky pool. The inevitable rumblings of the blackened earth beneath your feet eventually remind you that you remain on this planet. And when a jet of incandescent molten rock shoots skyward and illuminates the land like a flare, you feel as if you are staring down a dragon.For those seeking to experience the raw and almost preternatural power of a volcano, you would be hard-pressed to find a better place than Stromboli, northwest of the toe of Italy’s boot and aptly known as the Lighthouse of the Mediterranean.Rising a mere 3,000 feet above the waves of the Tyrrhenian Sea, the seemingly diminutive volcanic isle is famed for its near-continuous summit explosions. Most volcanoes spend much of their lifetime in a state of quiescence, but Stromboli bucks that trend. “It’s always active,” said Maurizio Ripepe, a geophysicist at the University of Florence in Italy. “I always say it’s the most reliable thing in Italy. It’s not like the trains.”
Image 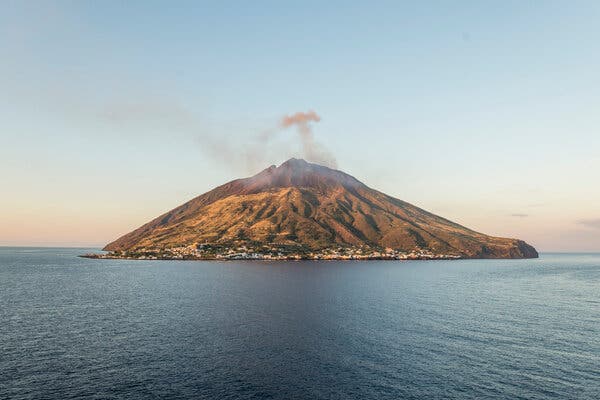 The seemingly diminutive volcanic isle of Stromboli is famed for its near-continuous summit explosions.
ImageVisitors and guides climbing at night on the volcano. After two paroxysmal volcanic explosions in 2019, hiking to the summit was forbidden.