This article is part of our latest Design special report, which is about expanding the possibilities of your home.Don’t call Travelers New Orleans a bed-and-breakfast.For one thing, there’s no breakfast (for now, anyway). For another, the phrase “conjures images of lace curtains and doilies,” said Ann Williams, who, with her mate, Chuck Rutledge, and a few other partners opened the nine-room, frippery-free inn in the Lower Garden District in April.Ms. Williams said she preferred to call Travelers New Orleans “an artist-run hospitality venture.” The lodging is overseen by resident artists, who live on the building’s third floor. In exchange for their work (around 20 hours a week) on front-of-the-house jobs like turning beds and advising guests about local attractions, they receive a furnished room, utilities, studio space and an hourly fee that usually adds up to about $800 a month.They also receive time: to paint, write, sculpt, bake or pursue whatever their calling is.Inspired by the collectively owned and operated 3B, a bed-and-breakfast in Brooklyn, which closed in 2016 following a change in the building’s ownership, Travelers New Orleans is the second establishment Mr. Rutledge and his partners have created with artists running the show. Their first, also called Travelers, opened two years ago in Clarksdale, Miss., where Mr. Rutledge lives and works as a developer.
He saw good reason for taking the concept to New Orleans. The city has a thriving creative sector that had grown by 59 percent between 2005 and 2016, but its housing is a reach for artists on a limited income.According to a report released last summer by the National Low Income Housing Coalition, the average renter in New Orleans makes $16.25 per hour, which is far less than the $20.73 hourly rate required to afford the average two-bedroom home in that city.For more than a decade, Mr. Rutledge and a partner had been sitting on an empty lot in the Lower Garden District. The spot was ideal for the project. It was just a few blocks from the Mississippi River, in a section of the city left relatively untouched by Katrina flooding thanks to its high ground, and close to attractions like the marshmallow-pink Grace King House.
Image 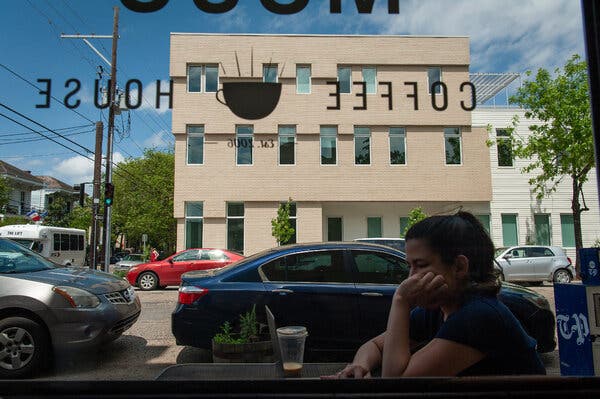 A customer sits outside a coffee shop across from the Travelers New Orleans.Credit…Rory Doyle for The New York Times