SYDNEY, Australia — Before the coronavirus pandemic surged, Drisya Dilin dropped her daughter off with her parents in India, expecting to bring her to Australia a month later. That was more than a year ago.Now, any attempt to get the 5-year-old to Australia, where she is a permanent resident, brings a threat of jail time or large fines.She’s one of about 8,000 Australians affected by an unprecedented travel ban that began on Monday, prompted by India’s record-breaking Covid outbreak. It is believed to be the first time that Australia has made it a criminal offense for its own citizens and permanent residents to enter the country.“I never expected this to happen,” said Ms. Dilin, a hospital administrator who has tried several times to repatriate her daughter to Australia, including on a charter flight this month that was canceled.
“She is missing us badly,” she said of her daughter. “She’s still counting days, thinking she is coming.”Much of the world has decided to cut off travel to and from India as it grapples with an uncontrolled outbreak that is killing thousands of people every day. But Australia, a continent with a strong preference for hard borders, has pushed isolation to a new extreme. No other democratic nation has issued a similar ban on all arrivals. Britain, Germany and the United States, for example, have restricted travel from India, but have exempted citizens and permanent residents, many of whom are rushing home.Australia’s decision — announced quietly late Friday night by officials who said it was necessary to keep the country safe — has built into a medical and moral crisis.Indian-Australians are outraged. Human rights groups have condemned the move as unnecessarily harsh and a violation of citizenship principles. Other critics have suggested that the policy was motivated by racism or, at the very least, a cultural double standard.
Image 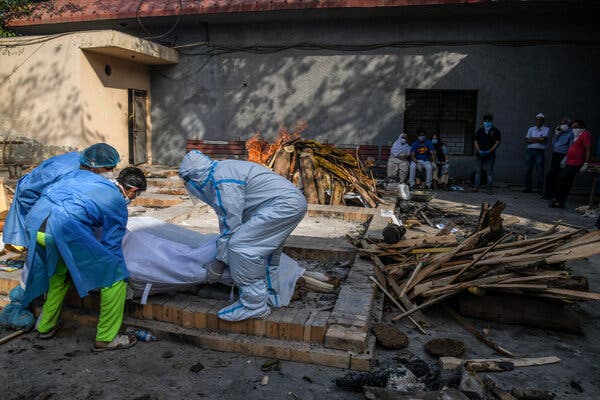 At a crematorium in New Delhi late last month. India is grappling with an uncontrolled Covid outbreak that is killing thousands of people every day.Credit…Atul Loke for The New York Times