Thunderous Plunges and Mossy Trickles: A Spring Guide to Waterfalls

As fall is to leaf-peeping, spring is to waterfall-watching, a seasonal pursuit now underway in the northern and higher regions of the United States.Waterfalls can range from thunderous plunges to delicate mossy trickles. They can be backcountry pop-ups or the centerpieces of parks, like Great Falls Park in McLean, Va., and Silver Falls State Park, near Salem, Ore.There’s no agreed upon definition of a waterfall, according to Joel Scheingross, an assistant professor of geology at the University of Nevada, Reno, who studies those that detach from the bed of a river, creating an air pocket between the face and the water jet. Waterfalls, he explained, can be the result of glacial carving (as at Niagara Falls), or through faults in tectonic plates. Places where hard and soft rock mix often produce waterfalls pouring over a harder rock cap that carve away soft rock below.“Any area where the water flow is dominated by snowmelt will get bigger waterfalls now, not just in the northern U.S., but at high elevations too,” Mr. Scheingross said. “If not snowmelt, you just need big storms.”
Especially now, perhaps, as pandemic-weary travelers continue to seek the safety and solace of the outdoors, waterfalls are, as Johnny Cheng, who writes about waterfalls on his website World of Waterfalls, puts it “metaphors for how life carries on and nature goes about doing its thing.”The following is a selective springtime guide to waterfalls around the United States. 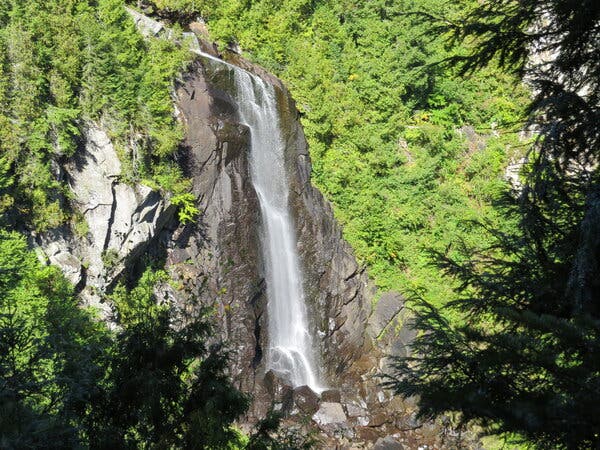 In the Adirondack Mountains, OK Slip Falls — one of the tallest in the area — is reached via a three-mile trail.Credit…Regional Office of Sustainable Tourism for the Adirondacks