Would the Pandemic Stop Paul Theroux From Traveling?

For five days, Paul Theroux, the famous American travel writer, dined on hard-boiled eggs, microwaved dal and wine.He had set out cross-country in a rented Jeep Compass on the day before Thanksgiving, driving from Cape Cod, where he has a house, to Los Angeles, where he delivered boxes of his papers to his archives at Huntington Library, and then flying on to Hawaii, his other home.Theroux said he observed a landscape largely emptied out by the coronavirus pandemic, from deserted motels in Sallisaw, Okla., and Tucumcari, N.M., where he stopped to sleep, to a rest area in Tennessee where he had his solitary Thanksgiving meal, and the In-N-Out Burger in Kingman, Ariz., on his last day on the road. Every night, as is his habit, he wrote out in longhand all he had seen.“It was like a panning shot of America,” he said in a video interview from the North Shore of Oahu, where he has lived off and on for over 30 years.
Theroux turns 80 in April. For a generation of backpackers now gone gray, the tattered paperback accounts of his treks through China, Africa and South America were a prod to adventure, bibles of inspiration under many a mosquito net. He has a new novel out from Houghton Mifflin Harcourt in April, “Under the Wave at Waimea,” and his best-known book (and his own favorite among them), “The Mosquito Coast,” has been adapted into a television series starring his nephew, Justin Theroux, also set to premiere next month.If this seems like a moment to take stock of an intrepid life and an almost extreme output of writing, Theroux does not see himself as anywhere near done. Before Covid-19 struck, he had plans to go to central Africa. He is deep into another novel and finishing up a new story collection. He himself can’t seem to keep track of the number of books he has written: “Fifty-something maybe?” (It’s actually 56.)
Image 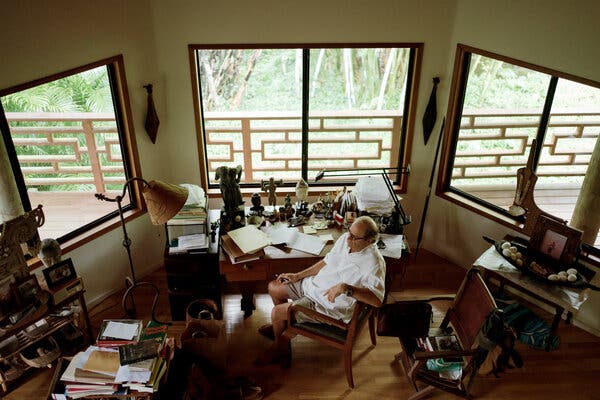 Paul Theroux in his home study in Hawaii.Credit…Michelle Mishina Kunz for The New York Times