On the Lookout for Moose on Michigan’s Isle Royale

At the onset of the coronavirus pandemic, with travel restrictions in place worldwide, we launched a new series — The World Through a Lens — in which photojournalists help transport you, virtually, to some of our planet’s most beautiful and intriguing places. This week, Tony Cenicola, a New York Times staff photographer, shares a collection of images from a remote island in Michigan.Tucked away in the northern reaches of Lake Superior, far closer to both Ontario and Minnesota than to the Upper Peninsula of Michigan, lies one of the country’s least visited national parks: Isle Royale.
The park — which consists of the 206-square-mile Isle Royale, along with hundreds of smaller adjacent islands — sees very few visitors. In 2018, the year I went, just 18,479 people visited the island portion of the park, the lowest number of any park in the contiguous 48 states. (Compare that, for example, with Grand Canyon National Park, which in 2018 drew nearly 6.4 million visitors.)
Image 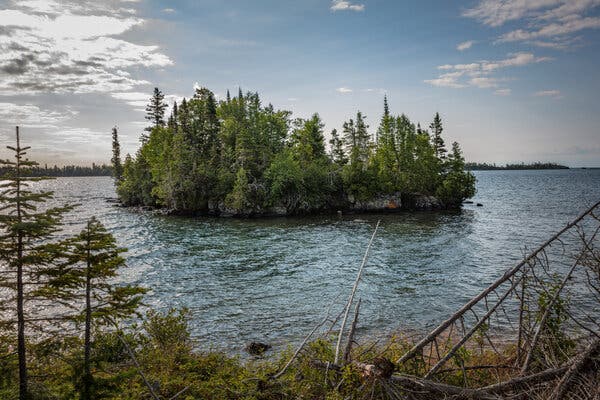 On the trail between Rock Harbor and Three Mile campgrounds.