House Hunting in Israel: A Modern Stone Farmhouse on 1.5 Acres

This Israeli version of a Mediterranean country home faces northwest toward the biblical Mount Tabor in the Lower Galilee region east of Haifa, Israel’s third-largest city.The four-bedroom stone house, built in 2010, is in Kfar Kish, a “moshav,” or agricultural community, of 600 residents known locally as a “little Tuscany,” where the rolling green landscape includes olive groves, vineyards and fruit orchards overlooking the Mount Tabor Nature Reserve and National Park.The property covers 1.5 acres, with fruit trees and 50 vines of Shiraz. It also comes with an additional 7.5 acres of olive groves and vineyards farmed in three separate parcels. Kfar Kish’s properties “are individually owned, but much of the land is farmed cooperatively,” said Alice Rubinfeld, an agent with the Neot Shiran agency, which has the listing.
A patchwork stone path leads from a four-car parking area past some date trees to the house. Antique wood doors in a stone wall open to a 1,076-square-foot courtyard. The wall connects two flat-roofed stone structures — the main residence and a guesthouse sharing the courtyard. Retractable roofs shade an outdoor dining area without obstructing the panoramic views.
Image 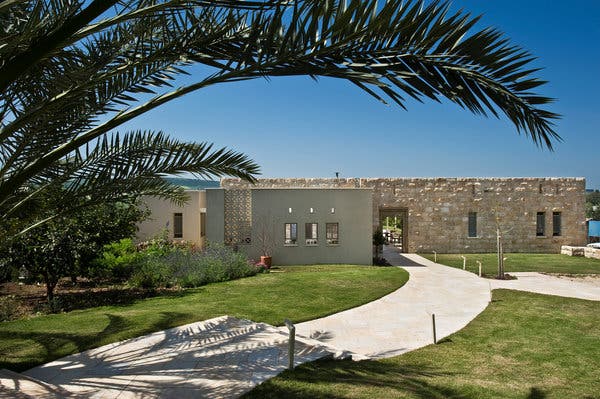 A stone path winds past date trees to the residence, which was built in 2010. Behind the stone wall, a four-bedroom main house and a guesthouse are divided by a shared courtyard.Credit…Neot Shiran